The Parish Church of St Laurence is situated in the market place of the Derbyshire industrial town of Long Eaton, which lies just north of the River Trent, about seven miles south-west of Nottingham, and which is part of the Nottingham Urban Area, but not part of the city.  Since 1974, Long Eaton has been part of Erewash District, and its population is around 45,000.  The parish population is approximately 12,000.  St John’s Church in College Street, originally a daughter church of St Laurence’s and designed by Charles Nicholson, became a separate parish in 1923.

St Laurence’s Church is listed Grade II*.  The original part of the church which now constitutes the south aisle and Lady Chapel, dates to just before the Norman Conquest and thus is the oldest building in Long Eaton.  Its chancel arch, for example, is early 11th century.  Indeed, much of this building is Norman and Early English.  With the rapid growth of Long Eaton in the 19th century as a result of the construction of the Erewash Canal and the arrival of the lace industry and the railway, the church – which had been a small chapel of ease for the rural parish of Sawley – was constituted a parish church in its own right with its own incumbent from 1864.  In order to accommodate the new situation, the church was expanded with a nave, chancel and north aisle in 1866 to the design of G E Street.  Thus we have in the church building an interesting marriage of Norman and neo-Gothic styles, giving an overall pleasing effect.  The cost of the work was £3000 – equivalent to some £250, 000 today.  The church re-opened for worship on 26th August 1869.  Vestries were added to the north-east corner in 1907 as well as a chancel screen, replacing one from the 1870s.  This was removed in 1949 and a replacement erected in 1952, together with an oak pulpit.  This screen was subsequently removed, its bases being relocated to the west end of the church.

The church is situated in a churchyard opened in 1839 but which was closed in 1890.  The churchyard was re-ordered in 1951 in co-operation with the Town Council, and made into an amenity area.  In 2003 a Garden of Remembrance was created to allow for the interment of cremated remains.  Outside the churchyard in Market Place, and to the left of the entrance to the churchyard, is the town War Memorial, a Calvary designed by Ninian Comper in 1921, set within a semi-circular railing with gates.

On entry to the south porch, itself a much later addition, there is an arch over the door to the church c.1135.  It features Norman ravens’ head stonework symbolizing the defeat of the devil.  The door issues into the original church building, now the south aisle, the chancel arch of which dates from 1375, although its arch head is clearly early 11th century, but restored in 1696.  An adjacent plaque records the names of the two churchwardens and parish clerk of the time who, it is believed, organized the restoration of the church after the serious fire of 1693 which devastated the village and affected the church.  There is an Early English window dating from 1480 in the south wall.  The chancel of the south aisle was set up as a Lady Chapel and this was restored in 1945, at which time a new altar was placed there.  A window depicting the Last Supper was inserted in the 1950s in memory of faithful communicants.  The Blessed Sacrament is reserved here to the left of the altar in a tabernacle which has a decorated wooden casing and which may be part of the refurbishment of 1945 or, possibly, part of the 1936 embellishment of the chancel and sanctuary.

To the left of the south door is the tower with its spire, dating from 1375.  The eight bells, originating from 1875, were re-cast and re-hung in 1973 by John Taylor of Loughborough.  The Victorian font stands here and, adjacent to it, is a painting of St James the Great which comes from the nearby 1893 Mission Church of St James but which was closed in 1952.  A statue of the Blessed Virgin Mary is located to the right of the south door.

The nave, chancel, and north aisle form G A Street’s enlargement of 1866.  The pine pews date from the 1930s and the floor was restored in 1974.  The east window by Ward and Hughes, depicting Christ’s birth, baptism, death, resurrection and ascension, dates from 1882.  The carved and gilded high altar with cross and six candlesticks, the work of the firm of Bowman of Stanford, together with houselling stools and oak choir and clergy stalls, were placed in the chancel in 1936.  The chancel roof was elaborately decorated by Wystan Widdows of Derby (who also designed the altar).  The Faith Craft hanging rood, dedicated on Holy Cross Day 1947, is a thank-offering for the preservation of the town, parish and church from the perils of the Second World War.   The two-manual organ is a 1986 re-build by Johnson of Derby of the three-manual Brindley and Foster organ installed in 1896 and which had been modified in 1951 by Henry Willis.

The north aisle contains the altar of St George, dating from 1938, alongside of which is found the memorial to the men of the town who gave their lives in the First World War.  A fine statue of the church’s patron St Laurence, the deacon-martyr, is found in the north-west end of this aisle, its niche being, in fact, the original north door which complemented the south entrance, but which was closed up.  This work also dates from 1938. 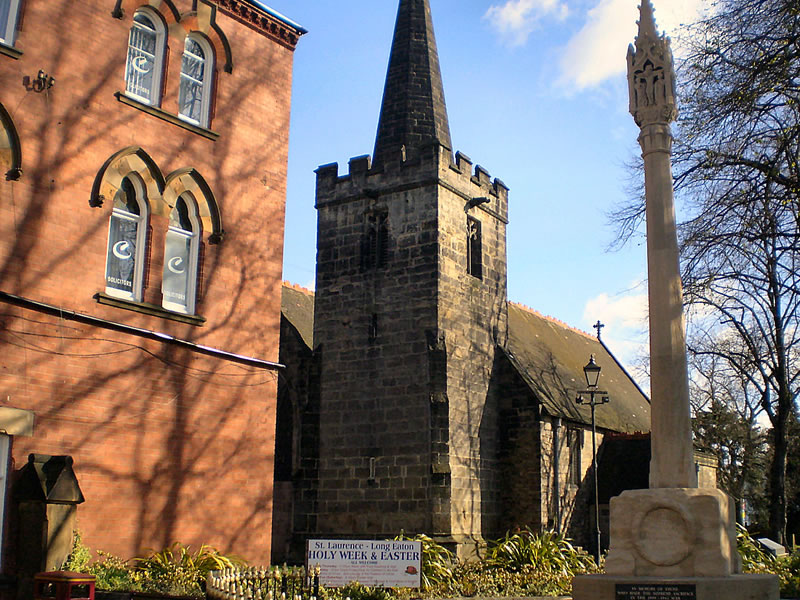 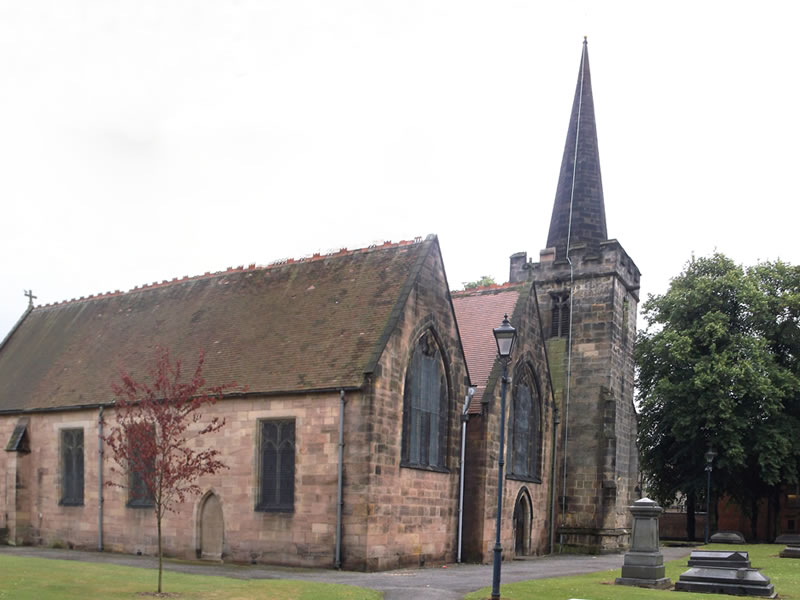 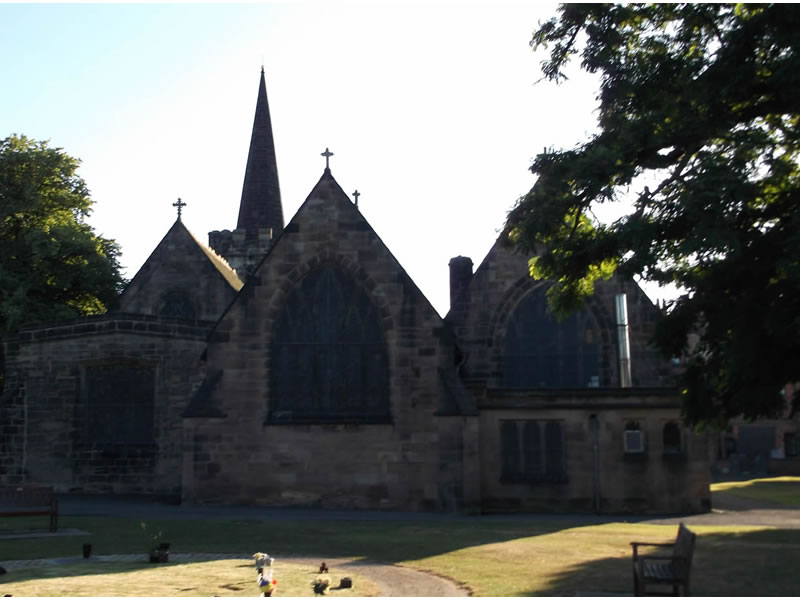